The Makery: Editing Audio With Audacity

Guide with resources for The Makery in Rose and Carrier Libraries

Audio, or sound, is a variation of air pressure, caused by the vibration of an object, like vocal cords or a guitar string or a hammer hitting a nail.  That vibration causes the surrounding air to vibrate: sound! Much like our larynx can create sound by creating vibrations, our ears can pick up those vibrations.

We can use an electromagnet to create sound from electricity: by placing a coil of wire near a permanent magnet, attaching a paper cone to it, and then turning electricity to it off and on very quickly.  This is a speaker: it causes the air around it to vibrate.  We can also make a microphone in a similar way: its vibration against the permanent magnet, picked up from the vibration of the surround air, causes the electromagnet to move, which creates electricity.  We can record that electrical representation of sound to a magnetic tape or a vinyl record, or we can take samples of it tens of thousands of times per second, and record and playback those samples using a computer.

Representing Audio Waves as a Waveform

A very pure sound like from a flute or a tuning fork will look like a pure sine wave.  A raspy sound like a washing machine or a librarian going "shhhh" will be a very complex wave.  In practice, sound captured by a microphone (or our ears) will nearly always be a complex wave - lots of different sounds of differing volumes stacked upon one another.  The visual representation of this is called a waveform.

The voice is a set of complex sounds: long throated sounds (vowels) with shorter, higher sounds in between (consonants).  Above is the waveform produced by an English speaker saying the word "Wikipedia".  Note how the letters 'K' and 'P' are very high-frequency sounds and stand out a bit from the rest of the word.  'D' and the transition from 'iy' to 'ah' are also noticeable, but to a lesser extent.

Below is a link to the Audacity website, where the latest version is freely available to download and use.

Importing and Listening To Audio

Audacity, like most digital audio workstations (DAWs) shows a waveform of a recording on a track.  It shows one or multiple tracks on a timeline.  Time runs from left-to-right.

Step 1: Find a file to edit

Audacity can import many common audio file formats, including WAV, AIFF, and MP3.

Step 2: Import the file into Audacity

Or drag and drop the file onto the timeline

Step 3: Look at the waveform

This image above shows a stereo waveform. The left channel is displayed in the top half of the track and the right channel in the bottom half. The track name takes the name of the imported audio file ("No Town" in this example). Where the waveform reaches closer to the top and bottom of the track, the audio is louder (and vice versa).

The ruler above the waveform shows you the length of the audio in minutes and seconds.

Step 4: Listen to the imported audio

The image above shows Transport Toolbar.

to listen to the audio. Click the Stop button

to stop playback. If you do not hear anything, see Audacity Setup and Configuration.

You can use the Space key on the keyboard as a shortcut for Play or Stop.

only the selection will play.

Recording from a Microphone

Correct adjustment of level before recording is essential to avoid noise or distortion.

Set the Recording Device either in the Devices section of Preferences or in Device Toolbar.

If you call the sound you want 'the signal', and all the background noise you don't want 'noise', then you're looking for a high signal-to-noise ratio.

With microphones, this can be achieved through careful placement, and with appropriate (loud but not distorting) setting of levels.

If digitizing a tape or vinyl album, or mixing music, your chief tool is appropriate (loud but not distorting) setting of levels.

Selecting a region using the mouse

The easiest way to select a region of audio is to click the left mouse button anywhere inside of an audio track, then drag (in either direction) until the other edge of your selection is made, then release the mouse.

If Selection tool is not selected (default setting), choose

from Tools Toolbar, below:

Selecting the whole of an individual track

The whole of an individual track can be selected by clicking in the Select button in the Track Control Panel to the left of a track.

You can select the entire length of all tracks on screen with Select > All or use the shortcut Ctrl + A (or ⌘ + A on a Mac).

When you record some audio or import audio from a file, you get a single track. In many cases, there are natural gaps in the audio - silence between sentences or pauses between phrases in music. Those are good candidates for splitting the track into multiple clips, allowing you to move or otherwise manipulate those clips independently.

To split a clip at the cursor (or region), press Ctrl-I (or Cmd-I on a Mac), or, select from the menu: Edit > Clip Boundaries > Split.

Select a clip or region within a clip, then press the Delete key, or select from the menu: Edit > Delete.

To move clips around independently, use the Time Shift Tool

. When you click on a clip and drag it to the left or right, this is called time-shifting because you are changing the time at which that audio will be heard.

You can cut, copy, and paste selected audio just like words in a word processor, using Ctrl-X, C, and V (Cmd-X, C, and V on a Mac), or via the Edit menu.

When you select Envelope Tool

from the Tools Toolbar, your track, which normally looks like this:

now has a thick blue border at the top and bottom of the waveform, like this:

An amplitude envelope is manipulated by a number of control points. Each control point is visible by its four handles (the small circles in the image below), by which you can drag the point up or down to control the volume level.

Here's an example of an amplitude envelope applied to the track. The volume is made to diminish slowly and then to grow again much faster (note the much steeper slope of the blue line). The volume is directly proportional to the height of the waveform - the smaller you make the waveform, the quieter it will sound:

Fades with the Envelope Tool

In this example we will create a fade that starts at full volume, then starts to fade slowly, then gradually more rapidly to silence, as illustrated here:

Click where you want to add additional control points as necessary to push out the envelope to the required shape.

Set the gain for this track. Hold down the shift key while dragging to adjust the slider in finer increments.

Exporting Audio to a File

The steps for exporting a file in MP3 format are the same as for a WAV file, except:

What Format Should I Use When Exporting?

If you're informally sharing the file with a friend, export to MP3.  This may also make sense for submitting class projects and the like - check with your professor.  If you intend to submit the file to a distribution system like iTunes, Anchor, Spotify, Audible, or save it for long term archival, then export to WAV. 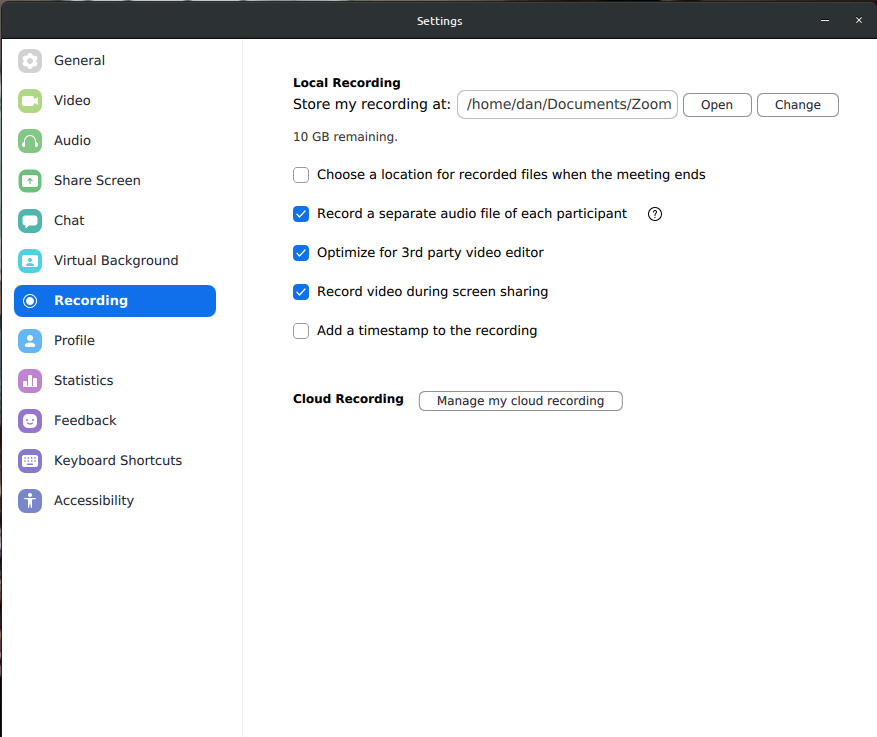